The Reverend Todd A. Rhodes, Sr. was born in the city of Brooklyn, New York to the late Ms. Joy Rhodes. The eldest of two sons; he was reared in the historic city of Savannah, Georgia where he received his formal education in both the private and public school systems. A graduate of the Alfred Ely Beach High School; he also graduated with honors from the Saint Leo university, where he earned his Bachelor of Arts Degree in Religion. Reverend Rhodes has also earned his Master of Arts Degree in Business and Organizational Security Management from the Webster University, located in Beaufort, South Carolina

Reverend Rhodes served his country as a veteran of the United States Army and currently serves our nation in the Georgia Air National Guard where he serves as Technical Sergeant. In August of 1989, this man of God began serving his community as a Peace Officer with the former Savannah Police Department; now known as the Savannah Chatham Metropolitan Police Department, where he served as a Lieutenant of Police.

In November of 1993 with a vision from the Lord, and the assistance of his beloved wife, Reverend Rhodes developed a charitable Christmas character affectionately known as Coppa Claus®. As Coppa Claus®, Reverend Rhodes delivers the love of Christ in the form of gift items to the under privileged families in low income communities throughout Savannah, Chatham, Effingham, and Bryan Counties; as well as to convalescent centers, hospitals and to the children of incarcerated parents as well as to the children who's parents have been victimized by those who are incarcerated. Coppa Claus® has also delivered gift items to the youth of our United States Military Personnel who are deployed over seas during the Christmas Season.

In September of 1996 Reverend Rhodes received and acknowledged his call into the Gospel Ministry and was licensed to preach the Gospel by the Rev. Dr. Thurmond N. Tillman, pastor of the Historic First African Baptist Church located in Savannah, Georgia on January 1, 1997. On July 22, 2001 the Lord elevated, and ordained him to serve as the Assistant to the Pastor. Rev. Rhodes currently serves as an instructor with the Glynn County Area Congress of Christian Education, Zion Baptist Association, and the General Missionary Baptist Convention of Georgia Inc. Congress of Christian Education. In addition, Rev. Rhodes also served as an adjunct professor at the Savannah Technical College, Liberty County Campus; where he instructed courses in criminal justice. After thirteen years of faithful dedication to The Lord through the ministry in which he was called; at the Historic First African Baptist Church under the dynamic leadership of the Rev. Dr. Thurmond N. Tillman. Reverend Rhodes was elevated to the Pastorate of the Shiloh Missionary Baptist Church of Brunswick, Georgia on March 5, 2009. Pastor Rhodes prayer for the Shiloh Missionary Baptist Church from the time of his installation as pastor; is that the Lord would grow the ministry of Shiloh in three ways: Spiritually, Physically and Fiscally; all of which The Lord is doing. 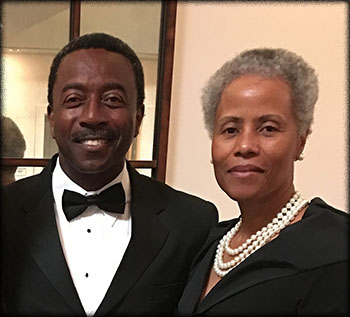 In the book of Genesis the second chapter; verse eighteen the Lord God states, "It is not good for man to be alone. I will make him a helper suitable for him," the Lord has blessed Reverend Rhodes to have joined in holy matrimony, the former Barbara J. Smith. Together their union has been blessed with two beautiful daughters: Todesia and Airiel. Three handsome sons: Carice, Jermaine, and Todd, Jr. The Reverend and Mrs. Rhodes are also the blessed grandparents of twelve grandchildren.